I’ve worked in and around the motor industry since 1988 and gained valuable experience in almost every dealers department. A former technician and vehicle salesperson, the strings to my bow include both LGV & PSV licenses. Never shy of getting dirty, you’ll often find me elbow deep under the bonnet of an old Rover or something similar.

I write for a number of car and commercial related titles including Car Mechanics Magazine, Classic and Vintage Commercials, Classic Car Weekly and the used car specialist for Parkers Guide. I currently reside in leafy Sussex.

From Tamworth to Tehran and from three wheelers to eleven metre buses, Barrie has worked all over the world on countless automotive projects that started aged just fifteen as a Jaguar apprentice. Latterly famous for being a director of the De Lorean Motor Company, he’s rubbed shoulders with the high and mighty from numerous organisations in the wonderful industry we call automotive.

His long period working with Reliant found him working with Tom Karen OBE of OGLE Design through which they forged a strong friendship that’s lasting to this day… long after the companies did. A larger than life character, raconteur, author and all round good egg – Mr Wills promises to bring us some humorous experiences from his sharp end of the mad and sometimes surreal world of cars, vans, truck and buses. Barrie resides in Warwickshire.

Ian has *enjoyed / had a *gutful of a lifetime spent working with everything nuts and bolts. He started out as a heavy goods apprentice diesel fitter, spent a while working as a civil servant and now works for a large OEM truck company managing and making decisions at a European level.

What little spare time he has revolves around family, friends and not at all least pointless road trips for curries, disinterested selfies and just general natter about the rise and failings of the British Motor Industry. Ian resides in Essex – but don’t let that put you off too much… he’s riotous fun!

John and I go back over thirty five years to the days when he was a young salesman at a local Citroen dealership In County Durham – he would throw me out for stealing the brochures. Since then, John has forged a path in car and commercial sales that reached the heights of National Sales Director for a known commercial vehicle manufacturer.

He claims to hate the motor trade – yet is still passionate about cars and loathes the general public – despite having the ability to charm the birds from the trees. John now runs a couple of successful businesses, sings in a band and works alongside other small enterprises assisting them with sales and marketing coaching. John resides in his homeland of Teesside. 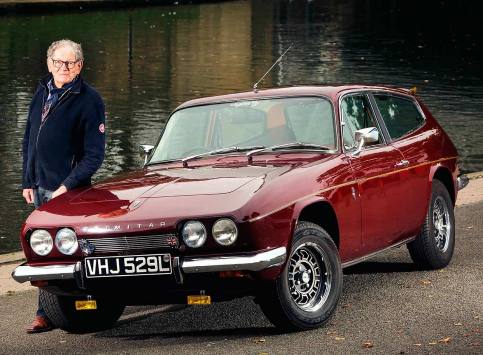 Tom Karen is one of the UK’s best known designers and stylists. Former Managing Director and Chief Designer of the World renown OGLE company, Tom and his team were responsible from designing things as small as children’s toys and bikes – notably the Raleigh Chopper, through to legendary cars such as the Reliant Scimitar GTE and the Bond Bug – working alongside Barrie Wills at Reliant.

His work has also been commissioned by Reliant, British Leyland, TripleX Glass, LDV and even Seddon Atkinson Trucks, but by far Toms biggest and most involving project ever was being asked to design a range of cabs for Leyland Vehicles / Motor Panels – the end result being the successful T45 range. Tom, who was awarded the OBE in 2018 is now semi-retired and lives in Cambridgeshire.