The opening of the state-of-the-art Engine Manufacturing Centre is a seminal moment for Jaguar Land Rover as it embarks on manufacturing engines in-house for the first time in a generation, confirming its position as the UK’s most significant automotive investor.

The Engine Manufacturing Centre will be home to the ‘Ingenium’ engine family, which will power a new generation of Jaguar Land Rover products designed, engineered and manufactured in the UK. This starts with the 2.0-litre diesel engine in the Jaguar XE. Jaguar Land Rover is transforming its business and brands through a programme of sustainable, strategic investments. 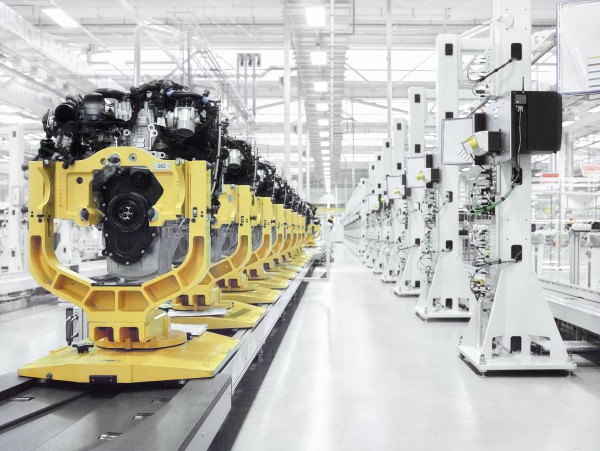 This £500 million facility is the latest demonstration of the company’s commitment to supporting the UK’s burgeoning manufacturing industry. When operating at full capacity, the Engine Manufacturing Centre will employ 1,400 people with a further 5,500 jobs created in the supply chain, where production of these engines will help provide a critical mass for inward investment.

At the heart of the Engine Manufacturing Centre is a team of people committed to setting a new global benchmark in the way engines are manufactured. Through an unrelenting commitment to training, Jaguar Land Rover is developing the skills required to future-proof its engineering capability and provide a sustainable foundation for continued business growth.

Welcome to the future of engine manufacturing in Britain.

Jaguar Land Rover is extremely proud to welcome Her Majesty The Queen and His Royal Highness The Duke of Edinburgh to the all-new Engine Manufacturing Centre. The company holds the Royal Warrant as “Manufacturers of Motor Vehicles, By Appointment” from all three current grantors: HM The Queen, HRH The Duke of Edinburgh and HRH The Prince of Wales.

Jaguar Land Rover is the only automotive manufacturer granted all three Royal Warrants. For nearly 900 years the Royal Warrant has been one of the proudest acknowledgements of quality around the world. It is granted to represent not only simple excellence of product or service, but also the personal preferences of the Royal grantors. A fleet of 10 Land Rovers, each bearing the Royal Crest and the Royal Standard, was used when HM The Queen and HRH The Duke of Edinburgh undertook their 44,000-mile tour of the Commonwealth in 1953/54, soon after the Coronation.

Since then HM The Queen, HRH The Duke of Edinburgh and other members of the Royal Family have regularly used a wide variety of Jaguar Land Rover vehicles.

“Almost half the total investment on the project was made on these machines.”

This area represents the cutting edge of manufacturing technology, utilising 150 state-of-the-art machines working across three lines. Everything from assembly robots and lasers to drilling and high-pressure wash machines operate here, representing an investment of more than £150 million.

The first line is where the aluminium block begins its transformation from a simple chunk of metal to the technologically advanced heart of the Ingenium engine. It is heated in an oven before undergoing a series of machining operations, always punctuated by high-pressure washes to filter debris away. The second line contains the cylinder head, which undergoes a similar process. The crankshaft line differs as it is machining forged steel, not aluminium. Here, the steel is milled, turned and drilled. Both automated and manual tests take place throughout each line, ensuring that each component is made to the highest standard of quality possible.

This area represents the precision of technology, driven by human craftsmanship. It is where the very first parts of the engines are made, containing within them the DNA of Ingenium.

“The assembly line is the birth of the engine.”

This is where approximately 245 separate parts come together to form an engine derivative. It is also where Jaguar Land Rover’s commitment to people is most evident; more than 150 associates currently work here, across a total of 17 zones.

More associates will join the team when the petrol Assembly Hall also becomes operational. The aluminium block, cylinder head and crankshaft move through the zones, each one bolstered by additional components and rigorous testing, before finally joining together.

The engine is then cold tested, an eco-friendly procedure that ensures the highest quality standards are met, before leaving the assembly line.

If the Machining Hall is where the journey of the engine begins, then the Assembly Hall is where it is given life, going from a disparate assemblage of components to a finished engine, the first member of the Ingenium family that will power a new generation of Jaguar Land Rover products.

LOGISTICS – EVERYTHING IN ITS PLACE

The logistical challenge that a facility of this scale represents is immense, and the logistical department is every bit as vital to the success of the centre as the manufacturing process itself.

The Engine Manufacturing Centre has 71 suppliers, approximately 30 per cent of which are based in the UK. Hundreds of individual parts will be required when both diesel and petrol divisions are operational. These will be delivered to two main receiving areas – five bays in the Assembly area and two in the Raw Materials area. Once inside the facility, the parts will be transported on specially adapted cargo trains, making 133 movements a day, facilitating a huge volume of engines while never compromising on quality.

This process has an inherent capacity for flexibility, allowing logistical operations to keep up with the rapidly evolving demands of the modern automotive industry.

PUTTING THE FACT IN FACTORY

£500 million investment
100,000m2 in size – the equivalent of 14 football pitches
6,500m3 of topsoil excavated from the site
4,400 tonnes of hot-rolled steel used in the construction
32.1 miles of trenching for ducts and drainage
21,000 photovoltaic panels on the roof, providing the same amount of energy required to power 1,600 homes
£650,000 – the average cost of one of the high-tech machines in the Machining Hall
0.003 millimetres – the detailing on a crankshaft is polished to be less than the width of a strand of human hair
245 – approximate number of parts in each engine derivative
90 seconds – time taken to perform a cold test on a single engine
ALIVE WITH TECHNOLOGY – INGENIUM

“Customers are increasingly demanding cleaner running, more efficient vehicles that maintain or even enhance performance attributes. Our Ingenium engines deliver this to a new level.”

These engines will be Jaguar Land Rover’s most advanced ever. This new family of premium, lightweight, four-cylinder units will utilise the most flexible engine architecture ever produced by Jaguar Land Rover, making them efficient, powerful and capable of producing up to 300Nm of torque while emitting as little as 99g/km of CO2.

The core of Ingenium comprises extremely strong and compact aluminium blocks, which will allow a range of engines to be developed, both quickly and efficiently, to meet the rigorous regulatory and competitive requirements of the future.

All variants will be equipped with high-tech turbochargers that improve performance, and help reduce CO2 emissions. Their modular design enables petrol and diesel engines to share many common internal components.

Before the first Ingenium engine leaves the factory, it will have already undergone the equivalent of more than eight years of the toughest, most punishing testing that Jaguar Land Rover engineers could devise. These include more than 72,000 hours of dyno testing and 2 million miles of real-world testing.

We will be the benchmark for excellence across the globe, creating a legacy for generations to come through a tenacious approach to continuous improvement. A proud and passionate family who live our values to create a supportive learning environment where there is equality and mutual respect for all.

Amongst the first objectives of the Engine Manufacturing Centre operations team was the establishment of a Vision and Values by which its entire workforce would live. These values will ensure that each and every employee plays their part in delivering the flawless standards required to set a new global benchmark for excellence in engine manufacturing.

When at full capacity the engine manufacturing centre family will be 1,400 strong, with each member showcasing world-class skills and expertise in the UK’s automotive heartland, creating a legacy for generations to come. To deliver this, a bespoke two-week training programme called ‘The Powertrain Way’ was developed to teach all employees, from HR consultants to machine operators, the lean engineering principles at the heart of the engine manufacturing operation.

To date, more than 20,000 training hours have been completed by 254 associates, driving quality standards forward.

The Engine Manufacturing Centre has been designed with sustainability embedded throughout and has recently been awarded a rating of ‘excellent’ by BREEAM, for sustainable buildings.

The centre has the largest rooftop solar panel installation in the UK, comprising no fewer than 21,000 individual panels. It is estimated that these panels will generate more than 30 per cent of the site’s energy, reducing its CO2 footprint by more than 2,400 tonnes per year.

Debris from the manufacturing process is filtered away and prepared for transport off-site. This is an environmentally friendly process, and the recycled aluminium briquettes created from it bolster the facility with additional revenue.

The production halls are ‘clean room’ environments, ventilated by a positive air system. Energy monitoring facilities in the plant continually analyse the amount of energy being used and identify opportunities to reduce electricity and gas consumption.