According to Rolls-Royce, Ghost Series II “presents a discreet and considered design update that frames significant technological advances, in doing so reaffirming Ghost’s status as conveyance of choice for the world’s most successful entrepreneurs. Indeed, it claims, “the Ghost is the most popular super-luxury motor car in the world (£200,000+)”. I got to sample the experience while at the SMMT press and media event recently at Millbrook.

Before one enters the rear of the Ghost, it requires a cursory glance around the exterior. Like it’s larger sibling, the Phantom, the lightly revised Ghost’s rear doors are suicidal – sorry, coach doors – and help maintain the long-bonneted, rear wheel drive luxury saloon proportions.

I have always loved this car, and am glad that Goodwood/Munich’s studios have retained the Ghost’s restraint in its second generation. Apparently, the bonnet is half an inch higher than that on the last Ghost, and the headlamps are slimmer. Subtle changes indeed.

Once the coach doors are opened, and in ‘Lounge seat’ configuration, the entrepreneurs will find their reclining chairs are gently angled towards each other to allow for intimate negotiations. Three-level heating and optional massage settings can help ease the tension should the high-level talks become fraught. 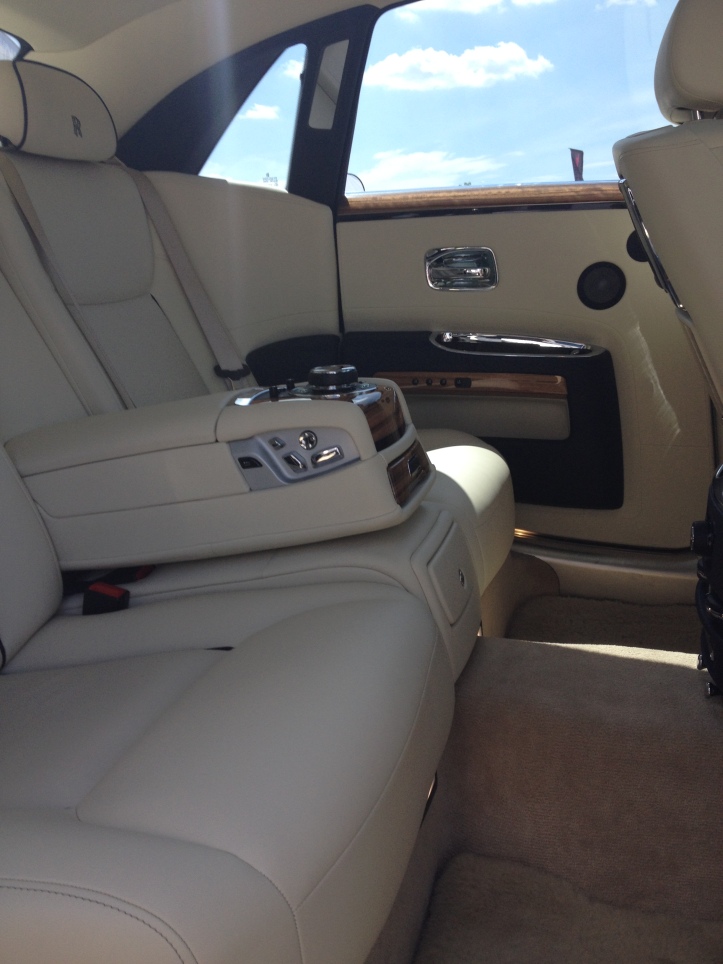 For the driver/chauffeur, a delicate wand requires a deft flick one of the ‘Satellite Aided Transmission’s’ ratios. Perhaps one should wear gloves when guiding the Ghost, fingers at a twenty-past-four at the thin rim. The short course didn’t give me chance to test the Ghost’s handling, and just as well. It would have been uncouth to attempt driving the Ghost like a Caterham. My concentration would have wondered while I listen out for any kind of engine sound (there is a 6.6 twin-turbo V12 that whispers away), enjoy the tactile titillation of the chrome airvents and search for the non-existent revcounter.

There’s more to tinkle about with when not in a hurry. The Spirit of Ecstasy figurine (aka Emily) celebrated her 103rd birthday last year and the Ghost’s interior features a ‘Spirit of Ecstasy Rotary Controller’ on a touch pad. I didn’t try it, but had I given it a go I’d have been able to write by finger, as well as scroll through the menus by turning the chrome dial and pressing down to select its functions.

Emily’s knob does without a touch screen that ‘might leave unsightly fingerprints at driver and passenger eye level’. Perhaps one needs gloves after all….