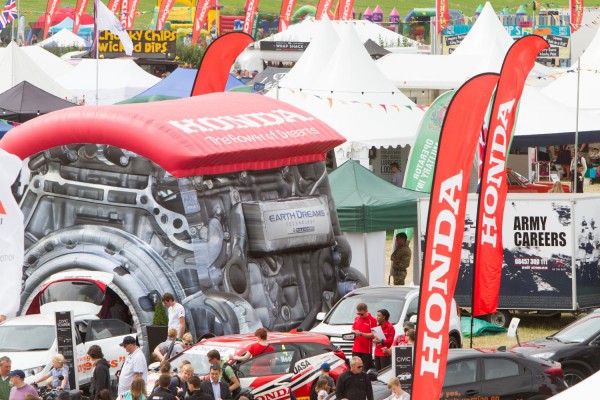 Honda (UK) is pulling out all the stops at Chris Evans’ two charity-focused CarFest events this summer, bringing along stars and cars, two-wheeled thrills and a range of crowd-pleasing entertainment and displays. CarFest is the brainchild of popular Radio 2 presenter and new Top Gear host Evans, raising vital funds for BBC Children In Need via a family-oriented, high-octane blend of fast and exotic cars, celebrity cameos and live music from some of the hottest acts around. Honda played a leading role last year and will return in 2015 to both CarFest North at Oulton Park in Cheshire (31 July – 2 August) and CarFest South at ex-Formula One World Champion Jody Scheckter’s Laverstoke Park Farm in Hampshire (28-30 August). A full Honda stand will showcase the company’s refreshed and exciting product range, including the Civic Type R, Civic Sport, Civic Tourer, HR-V, CR-V, Jazz and – straight from the brand’s award-winning Goodwood Festival of Speed stand – the McLaren-Honda MP4-30 in a box, as driven by F1 World Champions Fernando Alonso and Jenson Button.

Highlighting Honda’s expertise on two wheels as well as four, ten motorcycles will be on display, whilst the ‘King of the Hell’ Xbox roadshow roars into town, offering festival-goers the chance to win a brand new Civic Type R for a year by setting the fastest time around the notorious Nürburgring Nordschleife in a state-of-the-art simulator. Nicknamed ‘The Green Hell’ by F1 legend Sir Jackie Stewart, the 12.9-mile Nordschleife is regarded as the most challenging and daunting circuit in the world, with each lap comprising no fewer than 154 corners, large bumps, cambers and surface changes. The British-built Civic Type R – Honda’s ‘Race Car for the Road’ and the most extreme and high-performing model ever to wear the acclaimed ‘Red H’ badge – set a new front-wheel-drive lap record there last year, and in celebration of its arrival in UK dealerships, fans are invited to test their mettle by getting as close as possible to that impressive benchmark.

Honda Yuasa Racing Dunlop MSA British Touring Car Championship duo Gordon Shedden and Matt Neal – currently sitting first and third in the title standings, with Honda comfortably atop the manufacturers’ table – will perform high-speed demonstration runs behind the wheel of both the BTCC race car and road-going Civic Type R at CarFest North, before returning to the track in the Civic Type R at CarFest South. Honda’s latest Robot mower – Miimo – will be a working display in the Honda activity centre and will inspire a unique children’s drawing activity, whilst many of last summer’s favourites make a welcome return. My First Licence is a mini-motorbike taster session that introduces 5-to-11-year-old non-riders to the exciting world of motorcycling on restricted 50cc Honda CRF50 bikes in a safe, controlled and fully supervised environment, complete with helmets and kneepads and culminating in the presentation of their own special licence.

The ATV Experience on Honda’s TRX420 continues the fun yet educational theme, teaching older teens the inside line on throttle control, slaloming, overcoming obstacles and balance. The ride-on lawnmowers for 16-year-olds and above, meanwhile, generated hilarious head-to-head racing last year around a timed garden course, where lane control and garbage-grabbing were the orders of the day. Last but by no means least, the innovative and interactive ‘Power of Lean’ experience will allow those brave enough to simulate Superbike-style knee-down riding, replicating the feeling of being at full power whilst almost horizontal to the ground! Although most tickets have now sold out, there is still availability for Friday.