Nissan today celebrates a record breaking milestone as the 500,000th Qashqai rolls off the production line in Sunderland, UK. Achieving the feat in a record-breaking 21 months, Nissan’s pioneering flagship Crossover has become the fastest ever UK-built vehicle to smash the half million production mark.

Since its start of production in January 2014, a new Qashqai has been built every 62 seconds  on the Sunderland factory’s Line 1, with nearly 100,000 (20%) of these being delivered within the UK.

Today’s announcement also sees the Qashqai beat previous records set by the MK1 Ford Cortina, which took 34 months to hit the half million landmark, and the Austin/Morris 1100/1300 which reached the same total in 29 months. 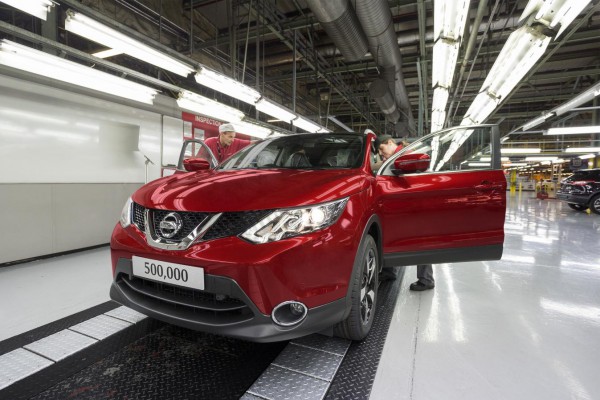 Although originally designed for the European market, it’s not just Europe where the Crossover is a popular choice – the Qashqai is now in demand in 84 countries worldwide including Uganda, Zambia, and Saint Kitts, to name a few.

“The Nissan Qashqai is going from strength to strength,” said Paul Willcox, Chairman, Nissan Europe. “Half a million Qashqais in just 21 months is an astonishing achievement and proof that the Qashqai is hitting the spot with buyers. Together with the pioneering first generation version, there are now more than 2.5 million Qashqais on the road in Europe, making Nissan the undisputed leader in the Crossover sector.”

Total global production of the Qashqai now tops 2.5 million. From late autumn 2015 the new Qashqai will also be manufactured in St. Petersburg for domestic sales in Russia.

Nissan Motor (GB) Ltd will be celebrating this milestone at an event in central London today.  Hosted by the Society of Motor Manufacturers and Traders (SMMT), the event is designed to showcase the importance of the UK automotive industry ahead of the 66th Frankfurt Motor Show.