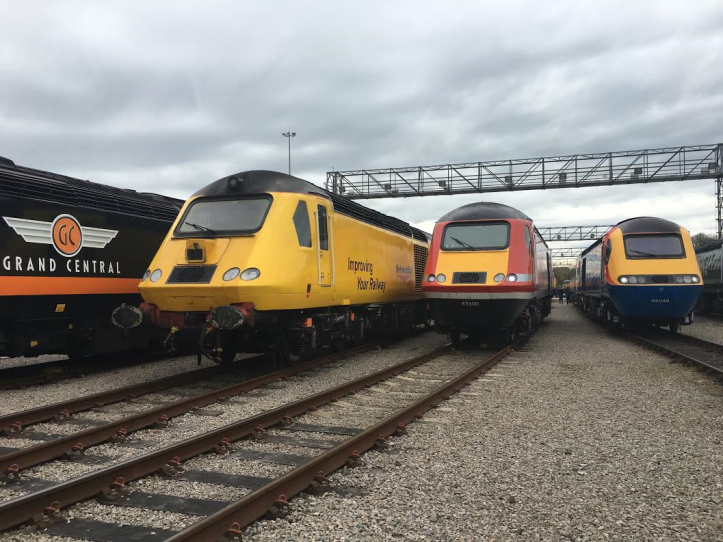 Trains… is there much else mechanical that tugs on the heartstrings of most red blooded little boys and some girls for that matter? Legend is a word that often gets thrown around too much in our modern society, a society where looking back seems to be the only way forward. But almost 50 years ago plans within BR hierarchy were morphing into a shape that would change the public perception of rail transportation. Those plans, and indeed its shape, without any doubt became stuff of wonderment and true legend, not just in the UK but all over the world. I am of course referring to the BR Class 43… the High Speed Train.

So when it was announced that GWR were to open the doors to its Bristol based St Phillips Marsh traction depot to celebrate 40 years of the High Speed Train, I didn’t need much persuasion to attend. In the event that was raising money for the Springboard charity, all in all over 5000 people attended which was considerably much more than was initially expected. Even long before the gates were opened, an orderly queue was slowly forming that eventually spread along the road for a good few hundred yards and the atmosphere were electric as both the young and old patiently waited for 10.30am.

It needs to be said that GWR and its events staff put on an amazing display of HST and heritage traction, organisation was spot on. The stars of the show came from operators including Grand Central, East Midlands Trains, Network Rail, Virgin East Coast and of course the prototype power car which now lives in the hands of the very capable 125 Group. But in the interest of balance, there was a mouth-watering collection of heritage locomotives too ranging from the LMS steamer Royal Scot to diesel traction such as the class 08 shunter right through to the mighty Class 50, the latter seeing their daily operational duties replaced by the HST for services into the west country.

It’s only the second time in the history of the depot that the gates have been opened to the general public and by midday the crowds were as thick as what you would find at a theme park. Despite the varied collection of heritage that included steam, the HST was the star attraction on the day with six examples from various operators of the former Inter-City network proudly standing to attention with the freshly restored prototype power car. But there was a nice surprise in store too. All attendees knew there was going to be a power car naming ceremony on the day, but just how special this was to be came as a very pleasant moment in history.

One of Britain’s leading stylists and industrial designers, Sir Kenneth Grange was in attendance to name power car 43002 in his honour. Sir Kenneth was involved with British Rail from the outset in 1968 when the idea of a new breed of high speed train was first mooted. The HST project came from a boardroom coup within the British Rail board of directors on a separate project known as APT or Advanced Passenger Train. Disagreements broke out over the heavy usage of unproven technology with APT such as its propulsion and tilting suspension methods. The engineering team that featured existing rail engineers and the best young talent from the nautical and aerospace sector soon found themselves at loggerheads.

It was only when a splinter group of dye-in-the-wool railway boffins headed up by the late chief engineer Terry Miller bluntly told the board that they could have a prototype express passenger train capable of speeds well in excess of 100mph using a more conventional diesel electric power supply. The bandy gang of renegades all agreed that this could be a reality within two years and put their case to the board. They were told to get on with it and true to their words a prototype 4500hp diesel electric train we now fondly call the HST was soon hammering its way around the network undertaking extensive proving runs – breaking the world speed diesel train speed record in 1973 at 143mph just for good measure. A production set smashed that record in 1987 with a recorded 148mph!

Sir Kenneth was initially commandeered to try styling ideas for exterior decoration and the Inter-City livery, but it was only when he decided to sketch some ideas out from his own mind-set that plans really took off becoming a milestone in British Railway history. Thinking that the existing cab looked clumsy and in need of some radical aesthetic improvement, Sir Kenneth, on one of his many think tank meetings at BR’s Derby based technical headquarters, pulled out his artwork in front of the BR board and awaited a response.

“I was very much treated by some as a young upstart by some rail men who had worked in the business man and boy. Some wondered just who the hell I thought I was when it was they who ought to know better about designing a train” – Sir Kenneth Grange on his occasional frosty receptions from key BR engineering managers.

With a huge grin he told me “there was a short silence as the drawings were passed around the room for inspection, you could almost hear the wall clock ticking and then came a huge tidal wave of acceptance”. Despite now being 86 years old, Sir Ken talks with youthful animation and total recall, chuckling to himself when he looks back thinking what these world wise engineers must have initially thought. Sir Ken quips: “I was very much treated by some as a young upstart by some rail men who had worked in the business man and boy. Some wondered just who the hell I thought I was when it was they who ought to know better about designing a train” that still tickles him pink to this day.

Attitudes within BR changed from that moment and despite considerable cost already invested in the prototype power car, his restyle was universally applauded and set in stone for full scale production. I suggested to him that maybe this was a rare example of everyone from the driver to the chairman of the board all singing from the same hymn sheet. His eyes light up and he retorts with a proud assertive tone: “absolutely dear boy, and the speed at which the project went along from that moment onwards was incredible“.

We were sitting in a newly refurbished GWR Mk3 first class coach and while we were talking, his eyes would occasionally scan everything from the carpet to the light fixtures in the roof. The man clearly cannot stop looking and studying every shape and form, this was something I noticed when I spent some time with another great designer – Dr Tom Karen. It was obvious that he still feels very proud of his involvement, so I ask if this is the case: “of all the things I have styled and put my mark on, most of which millions of people have had tangible exposure to, the HST has been the most thrilling project of them all”.

I even managed to speak to a couple of drivers, both stated that even now they get a subconscious thrill from being at the helm of a train they dreamed about driving when they were just boys still at school. Engineering staff still have a huge amount of respect for the train too, and engineering director Andy Mellors was keen to point out that the train was designed from the ground up to appeal to everyone that mattered from the passengers to the fitters. He went on state: “it revolutionised public transport and to this day continues to symbolise high speed rail travel”. Testimony to the ruggedness of the original design is the incredible feat that the class has now travelled a combined distance of around 803 million miles!

Despite the ongoing bar-room argument that is privatisation, one thing still runs clear and that is the incredible emotion and affection for a man made hulk of steel. Just like other legendary icons of transport such as Concorde, the HST is an emotive and iconic piece of design and ingenuity that outstripped all expectations of it. Not only that but it turned around the fortunes of BR and yet forty years on still makes boys, girls and adults stand and stare in admiration. Without a doubt the HST has been the most important and game changing train in the history of 20th century railways… happy birthday my friend!

Our thanks go to the following: