Ford celebrates 40 years since the first Ford Fiesta rolled off the production line in Valencia, Spain

When Ford launched the Fiesta, 40 years ago in 1976; few could have predicted the phenomenal success story that was going to unfold over the coming decades.

In 2014, the Ford Fiesta became the UK’s best-selling car of all time, overtaking the Ford Escort. It is not only the best-selling car in the UK this year; it has been the UK’s most popular car every month for the last seven years.

To celebrate this success, and the range of vehicles produced over the years, 40 of the nation’s favourite Fiestas travelled in convoy from the Ford Engine Plant in Dagenham to Brighton Race Course for the Kelsey Media organised, 2016 Ford Summer Festival – A celebration of all Ford models.

The Dagenham to Brighton drive was open to all Ford vehicles; each receiving a unique numbered plaque. Around 200 Fords took part with models ranging from Cortina’s to Rangers, and to mark the occasion, numbers 1-40 were allocated to Fiestas from the past four decades.

The Ford Fiesta MkI began production in the all-new Valencia factory in 1976 and sales in the UK commenced in 1977. Production versions of the Ford Fiesta MkI took part in the Dagenham to Brighton drive on Saturday. Ford of Britain chairman and managing director, Andy Barratt, said, “The opportunity to have these wonderful heritage vehicles lined up next to our latest Fiestas, such as the ST200, is very rare and was fully appreciated by the Ford fans that made the 69-mile journey down to the festival.”

Also on display at Dagenham was a MkIV 1.4 Fiesta Ghia; the 10 millionth Ford vehicle produced at Dagenham as well as the MkVI World Rally Championship car. The Fiesta MkI owners club were also involved in the drive, bringing with them a variety of sport Fiesta models as well as a MkII Fiesta Popular and a MkI Fiesta Van. (Quote: Owners Club)

The chronological evolution of Fiesta was evident, from the early MkI to the latest MkVII, and the changes significant, both visually and technologically. External design changes have been accompanied by new technologies, safety features and increased levels of equipment, many of which are now standard on the latest Fiesta, including air-conditioning, electric windows, Easy Fuel, electrically-operated and heated door mirrors and power-assisted steering.  Today’s Fiesta, with a range of class-leading powertrains – including the multi-award winning 1.0-litre Eco-Boost engine,  can be ordered with heated seats, cruise control and integrated navigation system which can even include a rear-view camera. 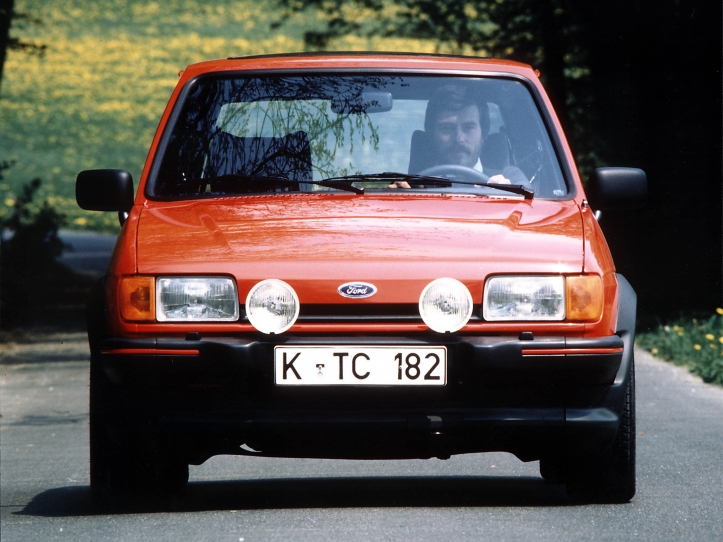 Red paint, pepperpots and driving lights – what else but the Mk2 XR2 launched for 1984.