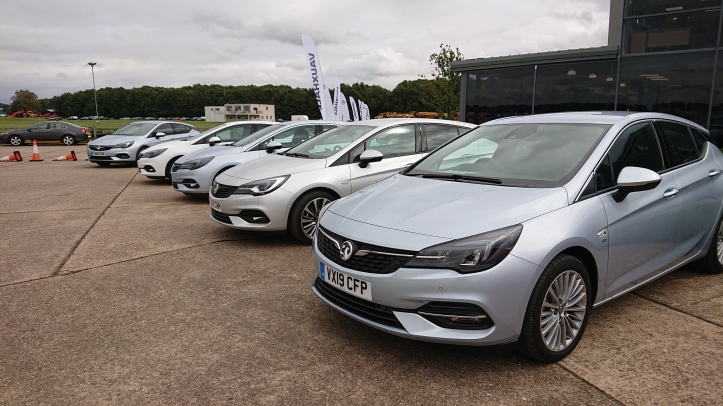 To call it new could be stretching the point slightly as its only when it’s viewed nose on that any real difference become noticeable. The Vauxhall Astra is very much a motoring example of perpetual motion, that point proven by the fact the model turns 40 years old in 2019. Within that time well over 3,000,000 cars have been sold and its hard to believe that the model has been in production for a considerably longer period than the Ford Escort was. Yet strangely, I still see the Astra as generally being a modern name, perhaps its the fact its always been front wheel drive. Astra has been a loyal family car, a hard grafting fleet motor – even a loyal crimefighting Police weapon throughout its life, I think its a vehicle that’s earnt its spurs over the past forty years.

Now in 7th current generation that was originally introduced in 2015, it has an even tougher battle than ever to win the hearts and minds of retail and fleet customers. Traditional mainstream rivals like Ford and VW are now joined by Pacific rim companies such as Hyundai and KIA. Some value orientated rivals, not forgetting Skoda, were once viewed as being almost sub-prime in terms of public perception – but this is no longer the case as their quality and image improves to impressive levels. Where Vauxhall seem to do well with the Astra, their second most popular model, is by having a loyal customer base. No doubt helped by a morale boost of having won the 2016 European Car of the Year award – the second time the Astra has won the coveted title – the MK2 won it in 1985.

This model, or Type K as it’s known in the trade, has always been an intelligent and clever car. The level of usable technology, partly thanks to the superb yet soon to end OnStar system, impressed me from the original 2015 launch of this model shape – so what’s all the fuss about with this model? Well mainly its the engineering and efficiency thanks to the whole existing engine line-up being changed for three new core engines and two all new gearboxes. All engines are brand new Opel designs from the sump plug upwards featuring alloy block and heads, four valves per cylinder, integral exhaust manifolding as well as state of the art technology including an electric water pump and electronically operated turbochargers.

Power levels are as follows- 1.2T petrol – 110 / 130 & 145Ps. The 1.4T which features an electronic water pump and twin balancer shafts offers 145Ps. Diesel options are a 1.5 3 cylinder developing 105 or 122Ps – all engines meet and exceed the current Eu6D emission standard. Manual gearboxes are updated existing 6 speed units, but there are two all new automatic options. The 1.4T 145Ps petrol comes fitted with an all new stepless CVT unit that is computer controlled that features seven forward parameters or programmed gear-like ratios to combat excess engine noise. The 1.5 diesel also a 3 cylinder, offers 105Ps in manual form or 122Ps when fitted to a 9 speed traditional automatic gearbox with torque converter drive and speed sensitive torque lock up.

Engineers have re-calibrated the steering to improve the feel at higher speeds and fitted a revised type of front strut and rear telescopic damper unit.

All cars feature new bumpers, grill and reshaped rear suspension control arms to reduce the overall drag factor of the car. The upper and lower portions of the new Astra’s radiator grille automatically open and close independently of one another, further improving the frontal airflow. The underbody optimisation improves the drag coefficient by reducing turbulence.  The benefits have resulted in a class leading drag coefficient Cd factor of 0.26 for the hatchback and a remarkable 0.25 for the Sports Tourer.

The new Astra is available with a new digital front camera, which is both smaller and more powerful than before thanks to a faster processor. It now not only recognises vehicles, but also pedestrians, greatly improving safety. Furthermore, thanks to the high-resolution camera, traffic sign recognition can now process even more traffic signs and show them as symbols on the display.

The digital rear view camera, available on selected models, is also more powerful and works in conjunction with the new Multimedia Navi Pro infotainment system. The view of the traffic behind the vehicle on the monitor is more distinct and precise, while the contrasts are more visible in the dark.

There’s smarter, faster and more intuitive Multimedia Radio, Multimedia Navi and Multimedia Navi Pro systems. All systems are compatible with Apple CarPlay and Android Auto without the need for expensive subscriptions. The top-of-the-line Multimedia Navi Pro – already featured in the Vauxhall Insignia – has an eight-inch colour touchscreen and can also be operated by voice control. Connected navigation services with real-time traffic information and online map updates make the journey more relaxed, while the navigation display itself appears with redesigned symbols in a fresher, more modern look. The same applies to the instrument cluster, which features a new digital speedometer.

Available as an option, is the E-Call emergency call function. If needed, help is just seconds away by pressing the red button. If the seatbelt tensioners or airbags are deployed, the system automatically makes an emergency call.

Compatible smartphones can now also be charged inductively via wireless charging on selected models. All the driver needs to do is place their smartphone into an opening in the centre console. The high-end Bose sound system, featured on selected models include seven loudspeakers, including a RichBass subwoofer under the boot. Up to eight different sound profiles can be stored via the digital amplifier.

On the recent launch event I got to sample the 1.2T manual, the 1.4CVT and the 1.5 9 speed diesel. All the engines seem to pull strongly and have a smoother nature than you’d find in some rivals 3 cylinder engines. There is a pleasing reduction in vibration in the cabin, at times there is a slight tremble of buzz detected through the wheel and pedals but its not intrusive enough to cause concern. I did notice a slight delay in your right pedal input and the power coming on stream, this may be due to the engine mapping, and they were all pre-production cars. Press on harder and the hard to ignore off-beat thrum can be heard. Once again, its not intrusive and I thought it sounded fun and characterful, I also noted the torque is plentiful from lower revs – it pulls well in the higher gears at lower speeds.

The upper driveline mountings are simple rubber based torque-axis units. To get this level of smoothness without expensive hydraulic based insulation is amazing – though I feel this fact will be lost with most customers. Also, when you load up the mountings with standing start power you don’t seem to get excessive noise and vibration as the engine beams causing the bottom location mounting to take the brunt of your racing start – this is often a major gripe with 3 cylinder powered cars but wasn’t experienced when I drove the Astra – well done! Gearshift quality seems to have some improvement too but that clumsy over-sized gearknob still remains.

The stepless 1.4T is possibly the best CVT transmission I have recently experienced in a smaller car. The engine noise is well supressed and when you do floor the pedal you don’t find your eardrums exploding. All models be it petrol or diesel have well spaced ratios and pretty decent cruising refinement. The 9 speed automatic works very well with the new 9 speed automatic gearbox thanks to a smooth flow of gearchanges and rapid fire kickdown. The revised damping has rid the Astra of its slightly scampering nature when traversing lumpy country roads. I always used to use the Golf as a benchmark when it came to cross country running. The Astra now feels relaxed and secure when the road surface quality alters quickly.

Shrugging off the speed has become a whole lot better thanks to the adoption of electronic brake servo boosting. This takes vacuum load off the engine and has transformed the feel of the brakes. The Astra was known for having a slightly fierce and snatchy feel of the footbrake – this has now vanished to leave a really good solid and progressive feel at the pedal. The only give-away of any trickery going on in the background is a barely audible click from a distant relay as the pump switches on to top up the servo every now and then when you touch the brakes. Nothing else changes braking-wise in terms of the all round disc system.

Some of my grumbles still go unchanged though. The steering at speed is vastly improved in terms of weight and feel, but its still too light at low speed. Also, I’ve never liked the rather over-light and cheap feeling column stalks. These are what I regard as being “first contact” items that any conquest customer who has come from say a Volkswagen or Skoda will notice this on first usage. The Grandland X has very similar looking units and yet have a quality feel when in use – so what’s the problem in engineering them to fit here. Thankfully though, the aforementioned is my only real concern when it comes to general quality. Everything else from the seat trim, its comfort and structural quality is up there with the best. Existing Astra customers will really like the improved comfort, suspension feel and body control – I promise you!

Certain models can be ordered with Vauxhalls latest virtual dashboard with its mixture of analogue and digital readouts. First seen in the Insignia it now has new displays that includes a “driving trend” feature. This shows your driving sympathy towards engine efficiency in the form of a lined graph. All of the other controls and operational procedures carry on over from the outgoing model with the same aplomb and ease of use. It’s sadly still lacking the kudos of the Germans or the really eye-catching interior of the Focus but for myself who has had a great deal of Astra experience – it’s decent car that’s just become a whole lot better.

But what really makes all the difference is huge leap forward in terms of fuel economy, fleet appeal and emission figures. Its also really great to see that Groupe PSA are working as normal with British and German based Vauxhall – Opel engineering. So to summarise then, I’m looking forward to spending some more time with the Astra as I feel its just got rather aggressive and business-like in the face of stiff competition.

It deserves to do well.