Further to the long awaited Millbrook SMMT test day that took place a couple of months back, I attended the regional Southern event at Hampshire’s Oakley Hall.

So in no order of preference and strictly in alphabetical order… here goes.

When I first saw the images I have to admit I wasn’t that impressed. I thought ‘oh no another Japanese car trying to stand out from crowd’. However, in the flesh I actually think its bold, dynamic and dare I say it… rather cool. Blimey a cool Lexus – that really is lavishing praise but I kid you not – its got a certain something about it, something enough to make it worthy of consideration.

With a combined petrol / hybrid output of 150bhp its no slouch and the company has gone some way in recent years to quieten down the ‘mooing cow’ effect of the CVT driveline. In fact, as you would expect of a Lexus, its rather serene and relaxing to drive – especially when cruising or trundling along. Another worthy point is the impressive ride comfort – notably when pootling around at low speeds – well done Lexus.

As with many Japanese machines though, the radio and infotainment settings are almost unfathomable until you are acclimatised with them and I did notice a strange buzzing noise coming from somewhere inside the dashboard. On the whole though its comfy, smooth, pacey with a nicely executed interior. The styling may be a bit brash to some but I rather like it.

CONCERNS: Not as space efficient as you’d think – Complicated controls 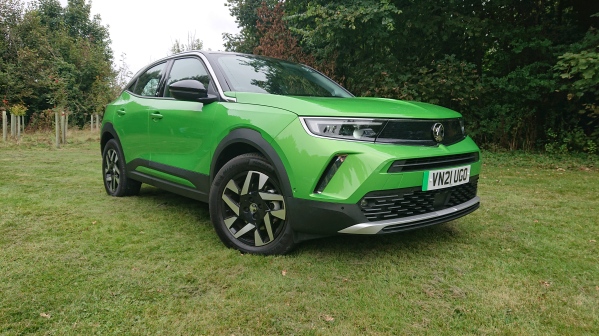 The new Mokka-e seems to be universally praised for its good looks – and I for one totally agree. Based on current Peugeot platforms it may be but engineers have been given a lengthy enough reign to make the interior and exteriors different enough to make you never realise. With every new model they launch, the Vauxhall styling gets that little bit more bolder without alienating the more traditional conservative Vauxhall customer.

Despite being very tech-savvy inside, the use of two virtual displays reduced the number of visible knobs and switches giving the cabin a clutter free and tidy view. Performance and ride comfort are quite good although some suspension noise is evident from the rear. Also, there isn’t quite that much interior space either – especially in the rear.

Gripes aside, the Mokka-E is a cracking looking car that virtually drives as well as it looks but Vauxhall PLEASE – sort out the sat nav display graphics… they’re bloody awful!

Ahh… good old fashioned petrol powered Volvo’s – regardless what you might think they still exist, and they’re still damn fine machines to drive too. The V60 offers a ‘sporting’ theme in a practical load hauling vista but don’t expect too much of the load bay – the roof line is rather low. Slot yourself in the low slung drivers seat though and there is no mistake you’re behind the wheel of a Volvo.

It feels light enough to be driven in spirit yet still seems granite tough – only the odd ignition on-off start button thingy feels a bit cheap and nasty. The ride comfort is very firm as you would expect with big alloys but once up to a decent clip the car rides well enough for you to really enjoy it.

Other nice bits include terrific performance from a 2.0 engine and blissful refinement when cruising at speed – fuel economy isn’t too bad either with up to 41.5mpg. Think of it as a credible antidote to an Audi Avant and your not far off.

LIKES: Generally very good build quality – Cracking performance – Stylish – For those who really wanted an Audi but don’t want to look like a prat.

CONCERNS: Expensive with options ticked – Low speed ride is a bit knobbly for some tastes.