We attended a recent Society of Motor Manufacturers and Traders press and media day offering an ideal opportunity to sample some of the new models launched recently. This included the important Jaguar XE and the astonishing Honda Civic Type-R… 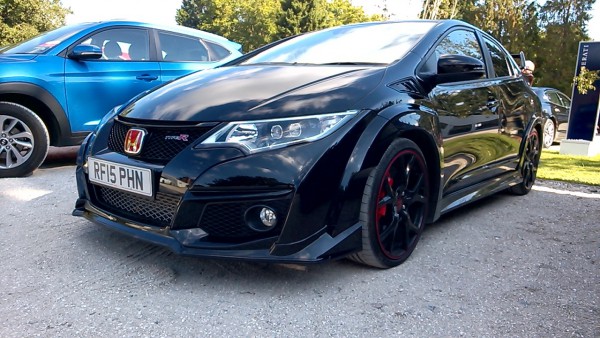 Civic may have a slightly unfair pedestrian image as far as mainstream sales go but the Type-R certainly gets the juices flowing even in just name alone. Honda in the UK have had a busy year with the new revised Civic and CR-V – both Swindon produced, but there’s also a totally new Jazz and HR-V just been launched. Not only that… a new NSX is heading our way too!

The Type-R sees Honda for the first time produce the expected V-Tec power as per norm… but now featuring turbocharging for your sporting delectation. Down in the engine room there’s a 2.0i-VTEC four cylinder thunderstorm punching 310Ps and 400Nm of torque. Owners of their own private racetrack will be pleased of the sub six second sprint to a mile per minute and a top whack approaching 170mph. Despite the aggressive styling cues and some very snug bucket seats, I was impressed at just how well it rides considering the cars sporting nature and the steering response is simply breath-taking.

Needless to say if you prod the loud pedal it goes like hell and grips like a frightened kitten running up the curtains. Designed to go toe to toe with the R series Golf and RS Focus, you can bet the Civic will be utterly reliable, hold its used values and still have all the usual Civic virtues such as clever usage of available space and a pedigree of racing heritage with tangible technology. The only downside I noted was the interior could have a bit more colour and its not cheap – its a fiver short of £30K without options.

But part in thanks to the standards of handling / ride / brakes / performance and a truly brilliant gearchange… I’ve already forgiven its rather short list of shortcomings – I loved it and found it not to be the widow maker I initially thought.

AUTPOBRITANNIA.NET have one on test early December!!!

What have we here… A Jaguar? with a clutch pedal? what will they be thinking of next. The oh so pretty F-Type in both coupé and drop top continue to turn heads and cause a sensation wherever they appear and the last time I personally experienced three pedal fast cat transport was in a very tired and rusty XJ-S. Times have indeed moved on and it seems Jaguar cannot put a paw wrong when it comes to producing sleek, technology led motor cars at their UK manufacturing sites.

The supercharged V6 offers all the power you could ever need (380ps) and the ZF supplied six speed manual slots up and down the ratios with a precise but notably rubbery feel. Thanks to the driver now having total control of the gearbox, you can make this stunning rag top howl and wail ever better than in auto form – the soundtrack is simply to die for. Crisp steering and a ride that’s just the right side of agreeable allied to an incredibly taught body shell cannot fail to impress the driver. Only one thing makes me ponder for a moment and that’s some of the materials used on the dashboard. The rising and falling automatic centre vents are super cool to watch in action but feel at odds with the price tag.

The two seater rag top handles exceptionally well and gets the power down to the road without drama. Thanks to traditional hydraulic PAS, there’s plenty of feel at the chunky steering wheel – you can really flick the tail around and have some fun on opposite lock.  The total alloy construction of the panels and chassis proves that beauty is more than skin deep as well. Pull open the bonnet and check out the plug riveted construction if you get the chance – this is not just a pretty fast cat, its a work of manufacturing art that looks awesome, drives beautifully, is well equipped… and very very British. 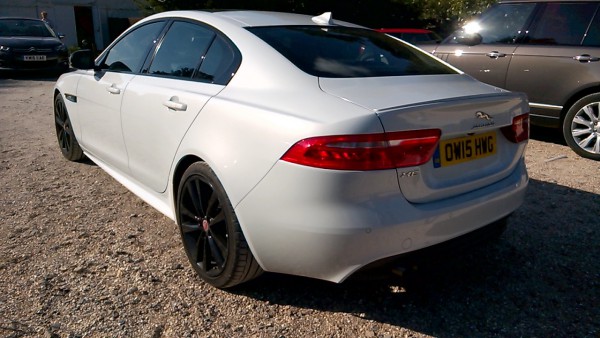 A much talked about car -the XE has certainly attracted attention in one of the industry’s longest product launches in recent years. Not all of the attention has been positive with many pundits bemoaning about Jaguar “selling out” – but what is a new car if not being sold? The XE has been designed to cut a slice into the lucrative middle management business sector and private buyer category who in the past may never have experienced a Jaguar before. But its rubbing shoulders with some very talented and established rivals like the M Sport and S-Line from Das Fatherland.

The R-Sport 2.0D features the all new Wolverhampton built 2.0 Ingenuim power unit which in itself is a £350 million investment in UK manufacturing for Jaguar Land Rover. One thing that will get the attention of the fleet manager is the potential of almost 7ompg – quite superb for a 160Ps power unit. There’s a definite family resemblance with big brother XF too (no bad thing) but shares a similar issue too – rear passenger space as the transmission takes up a fair amount of width. Anyone sitting in the rear might find their knees a little to foetal for their liking.

I thought the sunroof stole some headroom both front and rear too but forget that, a Jaguar is for driving and it certainly impresses here. Swift steering turn in, gutsy performance, strong brakes and good overall refinement along with really crisp handling remain true to the Jaguar philosophy of creating true drivers cars. Equipment levels are seemingly spot on too – on a par with rivals and the sports front seats keep you rigidly in situ akin to a theme park ride… but with absolute comfort. Build quality seems to be good too – nothing seemed loose or inadequate and the ergonomics appear just right.

So… an entry level Jaguar that doesn’t feel or look it. Its a pretty machine that drives really well – the driveline is just so brilliantly refined, you can barely feel the cogs changing – even when driving ten tenths. Look at the broader picture taking into account class leading economy, emissions, style and image and you are left with a rather superb four door British saloon. Its not perfect but it so deserves to do well… of which I’m sure it will.

Featuring the same Wolverhampton built Ingenium engine as the Jaguar XE, the Discovery Sport now has the refinement the outgoing 2.2 slightly lacked. The model driven was a manual six speeder that had a nice short shift action and a perfectly weighted clutch. Gone is the intruding racket when pushed, replaced with a power band that’s nice and wide – it even pulls at low revs a little better too. The build quality seems to be improved – not that it was poor before I must add, it just feels better than the last model I drove.

The ride comfort on all but the roughest of roads is really good at speed and the already impressive cruising refinement is even more impressive, only when you really press on does any thrash enter the cabin. I doubt owners or prospective buyers will feel too envious of Discovery or Range Rover owners, it may be the first rung on the ladder into green oval ownership but by no means does it feel or look cut price. From all angles the Discovery Sport is every inch a premium product and the lofty SUV driving position gives a commanding view ahead. The heated leather seats are snug and supportive, its ergonomically sorted and makes good use of available space.

Its all positive in other important areas too. Keen handling, reasonably communicative steering, a decent toybox in HSE trim and a very impressive sounding audio system make the sums add up and at the same time hammering home just exactly why the brand has been the world leader in all things all wheel drive for nearly 70 years. The only thing I could tut over was the low speed ride comfort – it seemed to be more restless and fidgety than the 2.2D I sampled… though that might just be me. Either way, the new 2.0D is a cracking drive and thanks to its intelligent terrain programme, surprisingly capable away from the tarmac – its a damn handsome looking thing too – what say you?

AUTOBRITANNIA.NET have one on test soon!

Despite the other cars above being sporting or premium, I was keen to grab a steer in the Derbyshire built new Auris. The last Touring Sports we sampled was the Hybrid model with CVT gearbox which unless you were prepared to pootle along with minimal throttle input was as refined as a Geordie Shore TV character after a good skin-full and a pot of bad Whelks. This revised conventional petrol model features a vastly improved central facia and an all new 1.2 turbo petrol engine – though the former still looks bit dour and slab like – only a complete new dash in its entirety would fully sort it to be really honest.

There’s too much hard plastic inside and the Astra, Golf and Focus all feature textures that are more sympathetic and softer to the touch. But the quality seems very good in general especially the exterior fit and finish – the best way I can describe it is that it feels like a Japanese car… efficient but devoid of spirit or soul. The boot is vast – not quite on a par with the class leading (also UK built) Civic Sports Tourer but still very good. Oddly though, that seems to have been done by slightly compromising the rear leg room somewhat.

But on the road the youthful and zesty turbo 1.2 sings away sweetly and is very refined. As for the ride comfort – it really does soak up the ruts and imperfections with a supple ride and good body control. I liked the light precise gear change quality and providing you keep just a few revs on the dial the engine makes a reasonable attempt at getting a gallon out of a pint pot in terms of torque and flexibility. Overall the Auris is a very pleasant if albeit slightly dull car to drive – but it really isn’t sporting as its title may suggest. That said… you know it will be reliable, you know the dealer will be courteous and attentive and you just know it will hold its value a few miles up the road of ownership.

how can it be best summarised? Well… its a revised Auris for those who like the Auris or a Toyota in general. There must be a good few out there as the Burnaston assembly plant built 70,000 of them in 2014 alone – a very well engineered and comfy car to roll along in.

AUTOBRITANNIA.NET have one on test soon!

AUTOBRITANNIA.NET would like to thank SMMT for the invite to the test day!