Your Thoughts : Nissan Note strikes a chord for John

John Eccleshall of Ashford Kent has kindly updated us on his recently delivered Nissan Note and so far… its lookin` good! 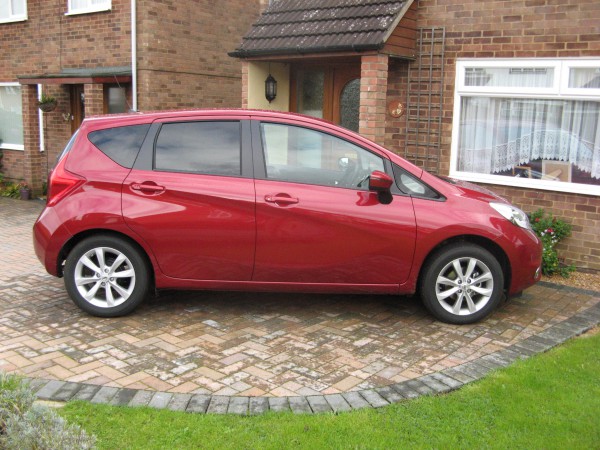 The Proclaimers may have walked 500 miles but the Note has now covered 900 more. Yes it’s a first month, its 1000 mile birthday. Four fuel top up’s and a couple of minor glitches later all is well. The on-board computer tells me it’s doing an overall average of 44mpg and the last tank to tank of mixed travel with 60% motorway is showing a steady improvement at 47 mpg which is up from the first tank of fuel at 38mpg.

That’s enough of the money side what about the experience of ownership you say. Well we collected the car from the totally supportive salesman Rummy Singh at KAP Nissan, a man who did not walk away when glitches became apparent. We had a pleasant handover, followed by a visit to the fleshpots of Sittingbourne just to get used to things.

Of the two glitches, one was the touch screen clock which was not switched on and the other was the screen washer jets which seemed to be incorrectly set as they only covered the bottom 25-30% of the screen and left smears on the top of the screen. After a chat with Rummy and then a very polite service receptionist, both glitches were attended to and efficiently rectified.

Like most cars in the price range it’s a case of give and take with the specification. In the Note’s case it gives more than it takes. It may not have all the whistles and bells of a similar priced Hyundai or the finish of a Polo but it also does not have the Polo price premium. What it does have is good passenger space and reasonable levels of kit such as Cruise control, Auto lights, DAB radio and a variable rear screen wiper to name but a few. In particular I do like the positive sounding audible warning when the indicators are on.

The boot is bigger than most for its size and the sliding rear seat still leaves leg room for passengers. The Origami school of folding the movable boot floor gives a couple of height options however on the high level it leaves a gap showing the optional extra spare wheel. But then again with the boot shut no one can see it.

Overall from the driver’s position you get an impression of space and comfort together with good access to all the knobs dials and switches. There is however, as pointed out by the lady of the house, an irritating reflection off the instruments on to the screen and side window at night. Other than that storage space is reasonable with lots of little cubby holes, but some of the plastic trim looks a little hard.

The one disappointment is the floor covering. I will not call it carpet as it’s some sort of felt with the consistency of thin moulded cardboard. General noise levels are comparable to other cars, so the insulation properties must be reasonable and well placed elsewhere. After more years than I care to admit of driving manual gearboxes I had a bit of a learning curve with the CVT, but overall it’s not been rocket science, just a different way of doing things.

Being old school, sitting in traffic with my foot on the footbrake to activate the stop start seems to increase the risk of being shunted forward if the person behind does not stop. It also chances frustrating people behind with the high level brake light in their eyes. Putting your foot on the brake, going to neutral and applying the handbrake re-engages the engine, so the alternative appears to be, shift through the box to park mode and apply the hand brake, to move off you then reverse the procedure. All of which gets a bit tedious in stop start traffic.

The 3 cylinder engine when started gives a pleasing exhaust sound of burbling happiness, followed by a suitably adequate performance from its 1.2 DIG supercharged power unit. Yes as Mike Humble say’s in his review: “the ECO mode does blunt the performance but it can be easily overridden“, However you do not have a need to override it if you can be proactive to your surroundings.

Overall the Note does pretty much what it says on the tin. With its 3 years warranty and a service package it’s a cost effective means of motoring without having to go down the food chain to protect the children’s inheritance.

I say 10/10 for sales and service. With top marks for the car but the little negatives keep coming to mind so it’s 8/10 for the car. Maybe a tweak of the software on the CVT and a redesign of the instrument cowl on the mid-term face lift could remove two of my negatives, but I fear the bean counters would have nightmares over the cost of improved floor covering.

The lady of the house is now mobile with her broken ankle and likes the car so much I have been relegated to her Yaris until I can negotiate a freeing up of further funds. However should she ever let me drive “HER CAR” again I will let you know.

” I’ve said it before with not only Nissan, but other Anglo-Asian car manufacturers – you really do tend to get a level of customer service and satisfaction that’s a notch above the usual volume marques. Honda, Nissan and Toyota seem to get things right – even when things go wrong. Nothing is perfect in this world and a customer with half an ounce of brain will understand this and quite often appreciate a good dealer even more.

I hope you enjoy the Note John – I would have tossed a coin between the Note or the Jazz to be fair, but owing to the fact the current Jazz is now built outside the UK, you have made a patriotic choice… I’m sure the Nissan will do you proud! “

You can re-visit the Nissan Note review by CLICKING HERE